Studying Sovereignty, Birthright, & the Anglo-American Empire of One World Government: Consent of the Governed

Extraordinary film from producer Steve Bates, and the World Freeman Society, Consent of the Governed, The Freeman Movement Defined, available on Youtube, Liveleak.com, and elsewhere, tracing what “Consent of the Governed” really means, how it operates today in all countries with corporate governments at the helm–certainly the “NSA Five Eyes” countries: US, UK, Canada, Australia, New Zealand, many countries in Europe, Asia, South America, including Jamaica, Israel, South Africa  (look up your country here), how We the People do indeed have natural rights, birthrights, human rights, and power of individual sovereignty under any government, that we are not bound by corporate statutes (“Laws”), and can and should withhold our consent to corporate statutes (“Laws”) that seek to abrogate and terminate our rights. Emphasized is the message that understanding our rights under natural law and common law, which precede and supersede corporate statutes would return us to an understanding of our sovereignty by birthright, and make us all “freemen” on the land. Included are snippets of public education on common law from experts in Australia, Canada, the UK, the US–John Harris, Kurt Kallenbach, Michael of Bernicia, many others.

The film also discusses the long-planned and long-known rise of a corporate Anglo-American plutocracy which, as we know today, is desperately attempting to tumble the whole world forward into a terrifyingly totalitarian One-World Government, designated newly as Global Government/Sustainable Planet/One World now that we all flinch on reflex from the term “New World Order,” and most obviously seen today in: the newly-released text of the completely-corporate TPP which seeks to destroy national sovereignty, the slavish propagandizing of  the provenly false science of “Global Warming” which completely ignores the Global Destruction of Geo-Engineering, the engineered influx of hundreds of thousands of displaced peoples from one continent to another–and openly understood now to be functioning covertly with an official  Global Depopulation agenda.

The film takes its title from the American Declaration of Independence, 1776:

“We hold these truths to be self-evident, that all men are created equal, that they are endowed by their Creator with certain unalienable Rights, that among these are Life, Liberty and the pursuit of Happiness.–That to secure these rights, Governments are instituted among Men, deriving their just powers from the consent of the governed, –That whenever any Form of Government becomes destructive of these ends, it is the Right of the People to alter or to abolish it, and to institute new Government, laying its foundation on such principles and organizing its powers in such form, as to them shall seem most likely to effect their Safety and Happiness.“

There’s some wonderful archival film footage throughout, including the video of a rather astonishingly inspiring and truth-telling 1964 speech from President Ronald Reagan, an interview with Aldous Huxley, famed author of Brave New World, who apparently followed up on this masterpiece of “fiction” with warning non-fiction about this world being “just around the corner,” an interview with John Lennon, who had come to understand “the world is ruled by absolutely insane psychopaths,” and telling snippets of video from others including President Barack Obama–some quotes below. (Watch the first few minutes for a lot of this film footage.)

Aldous Huxley–I think what will happen in the future is that dictators will find that…to preserve your power indefinitely, you have to get the Consent of the Ruled, and this they will do, partly by Drugs, as I foresaw in Brave New World, partly by these new techniques of Propaganda, bypassing the rational side of man and appealing to his Subconscious and his deeper Emotions and his Physiology, and making him actually love his slavery.

President Barack Obama--You must maintain your power through Consent, not Coercion.

President John F. Kennedy--Government at all levels, must meet its obligation to provide you with the fullest possible information outside the narrowest limits of national security.

For we are opposed around the world by a monolithic and ruthless conspiracy that relies on covert means for expanding its sphere of influence–on infiltration instead of invasion, on subversion instead of elections, on intimidation instead of free choice, on guerrillas by night instead of armies by day. It is a system which has conscripted vast human and material resources into the building of a tightly knit, highly efficient machine that combines military, diplomatic, intelligence, economic, scientific and political operations.

Its preparations are concealed, not published. Its mistakes are buried not headlined. Its dissenters are silenced, not praised. No expenditure is questioned, no rumor is printed, no secret is revealed.”

Full transcript of this highly informative speech at http://www.thepowerhour.com/news3/jfk_speech_transcript.htm 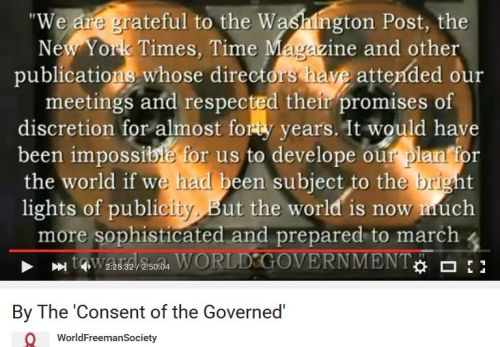 We are grateful to the Washington Post, the New York Times, Time Magazine and other great publications whose directors have attended our meetings and respected their promises of discretion for almost forty years. It would have been impossible for us to develop our plan for the world if we had been subjected to the lights of publicity during those years. But, the world is more sophisticated and prepared to march towards a world government. The supranational sovereignty of an intellectual elite and world bankers is surely preferable to the national determination practiced in past centuries.

G. Edward Griffin, author of The Creature from Jekyll Island: A Second Look at The Federal Reserve:

All of the great collectivists of history have had the goal of unified government based on the model of collectivism as their goal. We fought against it–until now we are the greatest advocate of it ourselves. Of course we don’t call it tyranny, we don’t call it fascism, or Nazism or communism, we have a better name for it, the name they have chosen is The New World Order.

Webster Griffin Tarpley, historian and author of Obama, The Post-Modern Coup – The Making of a Manchurian Candidate, and George Bush: The Unauthorized Biography:

The film’s long but worth your time. You could listen to it while working online, or watch in transit. The archival footage especially is extraordinary.