This World Notice of Crimes Against Humanity Using Energy and Neuro/Bio Weapons, endorsed by leading human rights advocates in the United States of America and Europe, has been updated and is being reissued worldwide to put all peoples on notice that the use of Anti-Personnel Non-Lethal Weapons or Directed Energy Weapons or Electromagnetic Weapons or Psychotronic Weapons or Neuro/Bio Weapons, currently being operated without consent on populations by governments, criminal justice organizations and Law Enforcement groups, medical organizations, intelligence agencies, and militaries worldwide, which involve the non-consensual remote access of human bodies and brains, constitute Crimes Against Humanity, as described in Article 7 of the Rome Statute, which formed the International Criminal Court in July 1998, and came into force in July 2002. 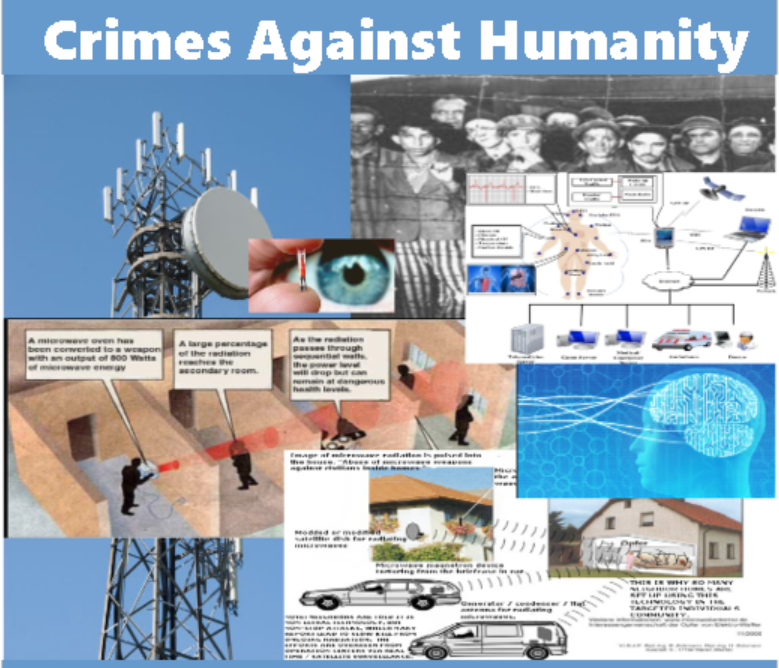 All concerned citizens and reporting victims of these crimes being passed off, deceptively, as normative and legal Surveillance, classified research, or beneficial human experimentation are advised and requested to send this notice (printable form in PDF-link  below) along with Article 7 of the Rome Statute or the entire Rome Statute (also in PDF-link below) to their elected representatives, Senators, ministers, and members of Congress or Parliament, to their local city and county and state governments, to their local and regional fusion centers, Citizen Watch groups, and police departments, to their local Universities and research institutions, to all Criminal Justice institutions, to all militaries and military leaders, departments of Homeland Security, to all Intelligence agencies, agents, and heads, to all courts, systems of justice, judges, lawyers, and advocates, to all technological/security service companies and departments in Universities, to telecom and electric/gas utility companies, to human rights, civil liberties, concerned citizen, bio-ethics, neuro-ethics, philosophy, sociology, psychology groups and departments in Universities, to writers, poets, journalists and press freedom groups, to physicians, psychologists, psychiatrists and physician groups, to church and religious leaders and faith groups, to scientists of every kind, and to any other professionals and groups you can think of, to inform all of this true world crisis and need to ameliorate it immediately.

Humanity has become an endangered species in the face of a predatorial Technofascist Surveillance/ Criminal Justice/ Military/ Intelligence/ Medical Monitoring industry of managerial, supremacist Elites using insidious remote-access spectrum neuro/bio weaponry for Remote Neural Monitoring and Torture of all humanity, rapidly being trained and deployed covertly and sadistically using negative Artificial Intelligence algorithms–obviating the need for overt Social Credit systems as in China but achieving the same ends, and worse: Total Human Control–it is up to us all to turn back the tide.

Notice of Theft of Intellectual Property

Notice to One is Notice to All

“…(T)he prohibition of crimes against humanity, similar to the prohibition of genocide, has been considered a peremptory norm of international law, from which no derogation is permitted and which is applicable to all States.” —United Nations Office on Genocide Prevention and the Responsibility to Protect

By this Notice, dated the 28th of October, 2019, let it be known, to all individuals, groups, corporations, agencies, organizations, foundations, governments, militaries, and citizens worldwide and in every Nation State, that:

— are Internationally understood to be Crimes Against Humanity, and include:

To repeat, these acts of extreme remote brain and body access, assault, and manipulation are internationally understood, as per Article 7 of the 1998 Rome Statute of the ICC—and understood by all seeking to investigate and prosecute those committing these crimes–to be Crimes Against Humanity.

2) These crimes are currently being investigated, and all those committing these crimes are being monitored. All individuals, groups, and corporate members and veterans of Militaries, Defense Departments, Defense/Security contractors, Air Force and Army Bases, Justice Departments, Intelligence/Security agencies, Intelligence/Security contractors, Law Enforcement departments, Fusion Center organizations, Bureaus of Investigation, Citizen Watch and Neighborhood Watch groups, Community Oriented Policing Programs, University “researchers,” and random citizens in neighborhoods, communities, and places of employment recruited to assist in the performance of these Crimes Against Humanity on the bodies of select individuals, presented deceptively by Nation State and military “authorities” of any kind as legitimate or lawful or legal targets of surveillance, monitoring, investigation, or experimentation are liable to being monitored by name, place of residence, place of employment, occupation, and association (to determine connection with Military/Intelligence/Law Enforcement/Neighborhood Watch/Community Oriented Policing Program if any.)

3) These crimes will be prosecuted in the International Criminal Court, in courts of Common Law, and in new, incorruptible People’s Courts and Tribunals to be focused on addressing Crimes Against Humanity.

4) Every single person or entity participating in these crimes in the smallest way, whether by pointing a cell phone issuing a wifi signal at a human being identified to them as a legitimate target or “test subject,” using an app on a cell phone to direct deadly radiation on such an identified human being, via the GlobalElectronic Control Grid (using cell towers, satellites, drones, sensors, air, space, ground -based and mobile tracking, sensing, and transmitting platforms), or using a portable directed-energy weapon or antenna system or transducer handed to them by an “authority” organization such as a Defensecontractor/military branch/Air Force Base/Intelligence agency/Security agency/Law Enforcement agency/Investigation agency/Neighborhood Watch group/Community Oriented Policing Progam is liable to being monitored, and will be documented by name and photographic or video/audio record.

6) Participants in these crimes are also hereby informed that Crimes Against Humanity they are recruited into performing, whether conducted and protected under cover of “National Security,” “in protection of the Homeland,” “legitimate military/criminal justice experimentation,” “research projects,” “socio-behavioral research,” “social engineering,” or “legitimate investigation,” are still, and primarily, Crimes Against Humanity, and will be prosecuted as such.

7) Participants in these Crimes Against Humanity—whether salaried employee of an organization as described above or paid/unpaid community volunteer–can both anticipate criminal charges, continuous written, photographic, audio and videographic documentation of their actions and words, and open publication at any time online and otherwise of their names, photographs, audio/video recordings and places of residence and employment.

PLEASE POST WIDELY, IN EVERY NATION OF THE WORLD, FOR THE PROTECTION OF ALL HUMANITY