I spoke to Barbara last night and wanted to relay one important message she shared with me, about her writing and calling out particular people engaged in such delectable activities as smear campaigns, infiltration of true activist movements, and agent-provocateur and saboteur actions directed against same.

I have to say it is always refreshing to speak with Barbara Hartwell on such matters, since she is well-rooted in her Christian faith, has an unshakeable roster of principles to live by, does not equivocate, does not compromise, is unafraid to clearly speak her mind, analyzes things both with her innate intelligence and training as well as through the filter of her spiritual principles, and inevitably delivers a verdict that goes directly to the heart of the matter and is not a Masonic chess-board-style perspective which pretends it can play both sides, marking itself in the process as unprincipled.

The message she shared was about the intent behind such writing which exposes and names, within the mileiu of a media scene spiked with duplicity and crawling with infiltrators: the purpose is to warn, to inform, to put the information out there so others may be apprised and understand the truth. The information is also posted so others may do their own research, engage in their own thinking about it all, and come to their own conclusions. With smear campaigns too, of course, the intent is to repudiate the smear, to deconstruct and expose the truth which is being attacked and sullied by the smear.

This is precisely the reason behind my own writing to examine and expose those who have recently engaged–and continue to engage–in smear campaigns against my name, and those who have successfully infiltrated, co-opted, run Disinformation campaigns, and appear to commandeer the quite-splintered “TI Community”–which Barbara Hartwell recently described for us, with her Counterintelligence training, as Containment Operations. (TI standing for the term “Targeted Individual,” an unfortunate label emanating from the military and early infiltrators themselves, which no doubt is accurate, yet has become a misused label by way of the long-standing Mental Health Fraud operation executed on it.)

I have written extensively on this myself in The Consequences of Infiltration. 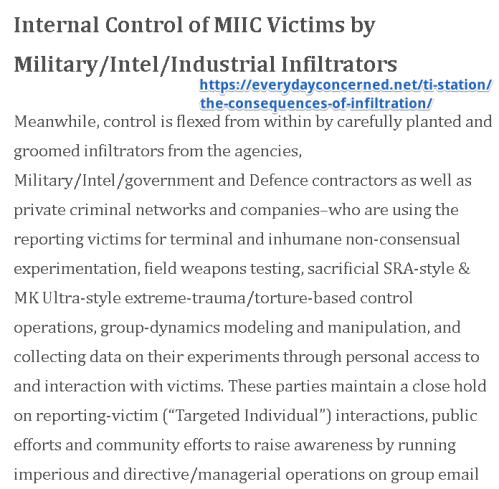 Having endured the multiple advances of a flurry of infiltrators on email lists, now expanded into Twitter and Facebook forums and private email over literally six years since I was first extra-judicially targeted and sought to connect with others to find out more, research, eventually write, and engage in public activism efforts to expose these government and private-sector crimes, my own assessment currently is that there are hundreds of genuine targets/MIIC victims out there, but plenty of fakers, trolls, victim role-players too.

I do not see a “TI Community” anymore but a rather large “TI Containment Ops Community” with several Disinfo-running groups and individuals supporting each other, with pockets of true-TIs connecting in groups on social media.

I do not see myself or posit myself as a leader of any of these communities or groups, but some do (I mean, they posit themselves as such).

I understand that my quite-visible journalism and human-rights advocacy in this space makes my name prominent, and I encourage all to use my work as significant, referrable reportage for their own work of personal letter-writing, activism, and to raise public awareness.

My purpose in this space is to continue my journalism and HR advocacy–which seems to trouble certain parties inordinately, the very same who have currently and recently been engaging in mob attacks against me, and who are apparently bonding with each other over lies and disinformation, as perhaps, is their special charge from Mission Command.

I am sorry for those who believe in these lies, who cling to the liars, and who wait interminably for these mushrooming groups to speak for them, to advocate for them, to run class-action lawsuits which will Not be thrown out by State Secrets Privilege, and to save them. I encourage everyone to speak out themselves, to write letters, blogs, websites, articles, affidavits, accounts, journals, books themselves, to take action to educate others and raise public awareness, to name and shame the offenders publicly, to demand of the offenders an end to these persecution, torture, and experimentation programs. I wrote to Attorney-General Barr last week, feel free to use my letter and send your own.

This is already taking time, and may take more time. These offenders in high places are protecting their lifestyles, their industries, their names and titles and comfy positions of power. Never stop exposing them.

In the process of exposing, I guess I have learned now to expect smear campaigns.

These industries WANT victims, and corrupt #FBI/#DHS are busy creating them. #WatchlistFraud #FBILies #DHSLies & #Kickbacks behind all.

And apparently #SmearCampaigns against the truthtellers are part of this #SeamySeascape. (Law of the See…) 59/ pic.twitter.com/IBZGSO7Q33

#SmearAlert My writing/vids must be becoming awfully Effective given the #RiseInAttacks lately. Noting, for their Smears, Inventions, Lies, Revisions of History, as of date:#OrtaineDevian #DeborahWeber#MidgeMathis#EllaFree#BarbaraHarrison#AndySpoo#DrKatherineHorton

Thanks very much to Barbara Hartwell for discussing openly why Smear Campaigns are run, and what they really mean.

“When the debate is over, slander becomes the tool of the loser.”

NOTE: This is a brief report I published (2006) on another site in relation to the defamation campaigns being waged against a number of my friends and colleagues, all Christians and Patriots, Defenders of Liberty.

Since that time, I have observed that the smear campaigns run on the Internet against legitimate persons (journalists, activists, whistleblowers) have tremendously escalated, especially due to the nature of social media. However, the same basic principles apply.

If your good name is being slandered, libeled, smeared, especially by diverse individuals, groups, organizations, and if outright fabrications are the basis of the smears, your adversaries are certain to be LOWLIFE LOSERS who cannot present a logical, reasonable argument, nor any facts, nor evidence to support their position.

As liars and cowards, these unscrupulous reprobates resort to the smear campaign.

MOST LIKELY TO BE TARGETS OF A SMEAR CAMPAIGN

A “high profile” individual, having a name that is usually recognizable.

Uses his/her real name on Internet posts, not attempting to hide behind a screen name or “anonymous”.

Has a “track record” of exposing government corruption, crimes, political chicanery and skulduggery.

Bases his/her reports on facts; names the names of
criminals/perps/provocateurs, etc. Demands evidence from others for corroboration of facts as well as furnishing it.

Is consistent in sticking to solid principles, year in, year out. Believes in moral absolutes. Defends the God-given, Unalienable Rights of the Individual.

Is a defender of the Constitution of the United States of America, against all enemies, foreign and domestic.

Has a “no-nonsense” attitude in standing up against police state tactics, from law enforcement officers right up to the crooks in the White House, and everyone in-between.

Has bona fides (of one type or another) which establish legitimacy.

Has a previous (often long-standing) record of harassment/ persecution by criminals in government and their hirelings and minions. May have been falsely deemed “enemy of the state”; “terrorist”; “enemy combatant”; “high-profile subversive” and so on….

What type of person are we looking at here? Seems to me we’re looking at a person who may be considered a serious “threat” to the status quo of corrupt government, the New World Order, Communism/ Socialism/ Fascism/global tyranny and totalitarianism.

It also seems to me that anyone who would target such an individual for harassment, stalking, slander/libel/bashing and trashing…in attempts to demonize and DISCREDIT that individual, has an awful lot in common with the corrupt government officials who also are desperate to DISCREDIT/silence/neutralize that individual.

Posted in America, COINTELPRO, Defamation and Slander, Truth, Waking Up, Your Individual Voice