The US-Europe Joint Investigation Team is pleased and proud to stand right by key member, key American whistleblower, and former NSA Intelligence Analyst Karen Melton-Stewart‘s side in this critically important and profoundly thought-out, acute, and well-referenced address she has penned to American Law Enforcement, in particular personnel from Police Departments and Sheriffs’ offices. Karen Stewart offers this address as a flyer, much in line with the other brilliant flyers she has been pumping out on a regular basis, some of which can be found here, at Flyers for Public Education, and encourages all to print out and spread this address far and wide, most especially to all police in America.

In all takeovers of nations, no doubt the police contingent is colonized early. Many of us know, simply looking at the state of affairs in the USA today, and in particular at how the police are behaving, in both inner cities and outer suburbs, in predominantly white neighborhoods and predominantly black or diversely-populated neighborhoods, that absolutely inexplicable and execrable behaviors have been unleashed on communities by Law Enforcement under complacent cover of the “need for increased scrutiny” self-permitted to the bulldozing, biometric behemoth of the Surveillance State, always touting terrorism and National Security as rationale.

What is less known to most however, by way of controlled mainstream media publishing deception, lies, and propaganda, and alternative media standing apart in reluctance to touch, is the fact that worse has been going on for nearly two decades now, ever since 9/11. Terrorist watchlists have been grossly inflated, communities have been silenced with lies, and EMF/neuroweapons or DEWs (Directed Energy Weapons) have been rolled out en masse all across the USA, bringing carcinogenic physical Radiation Surveillance, terminal non-consensual neuro-experimentation, and terminal weapons-testing, replete with “Bio Behavioral Research,” courtesy covert Civilian-Military Operations and Military/Intelligence hubris to neighborhoods. In all cases, no terrorists are being surveilled and monitored and attacked with stealth radiation weapons, but outstanding, moral, community-minded Americans, journalists, whistleblowers, and activists who exhibit leadership qualities, speak out about corruption, or simply speak their minds.

These matters have previously been addressed here in many articles including Karen’s notice of the Silent Holocaust in the USA, the joint Memorandum to President Trump on Domestic Torture Running Under Cover of Surveillance, Dr. Katherine Horton’s address to Americans regarding the Global Concentration Camps being run by Intelligence/Militaries, in FBI whistleblower Geral Sosbee’s urgent analyses and warnings, and in many articles at Dr. Eric Karlstrom’s site, including this one, expounding on what he terms as GOG’s NEW GESTAPO.

In this address, Karen brings the question down into succinctly American terms: Do American police not recognize what they are doing to the USA? Do they not realize they are flouting the protections of American law, in addition to basic human understandings of human rights and civil liberties? With righteous indignation she notes:

“The early 21st Century will be regarded as the Dark Ages of SHAMEFUL law enforcement BETRAYAL, when it ALLOWED hundreds of thousands of innocent people to be tortured and murdered under their noses. Now, ARE you an OATH KEEPER and PATRIOT who supports the PRINCIPLES UPON WHICH our country was FOUNDED? Or are you a thug for the New World Order, which invaded, infiltrated, and usurped the US government in order to commit genocide – with your passive and active help? Are you the watchmen who fell asleep on the wall and allowed the USA to be destroyed from within?” 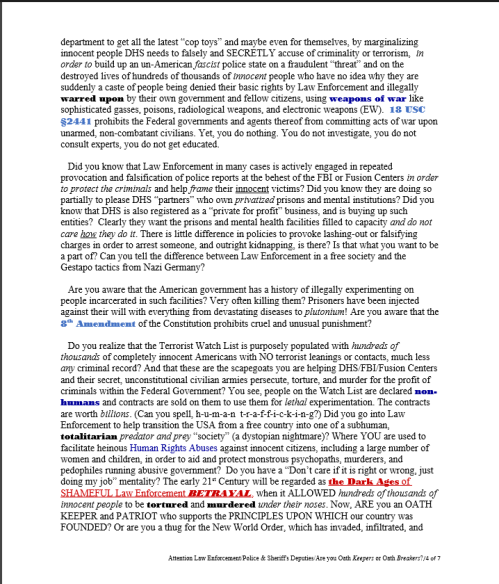 Posted in Activism, America, Waking Up