We, the friends of Julian Anthony Fernandes, hereby demand a full Inquest into his highly premature and suspicious death aged 50, as a very healthy fit man, dob 18 Feb 1969.

We knew that he was being targeted by Financial Institutions and Banks because of his work as a Mortgage Fraud Whistleblower for 11 million mortgages.(1)(2)

It would be very negligent of the Coroner’s office to allow the Cremation to take place in the next few days without a full and proper investigation into his very premature and suspicious death. If an Inquest has already taken place, then we demand a second Inquest.

The murder, disappearances and fraudulent death certificates and Inquests in the UK is known about to be common in the UK for 20 years (1), especially in hospitals. We understand he was recently discharged from hospital.

Many thanks to Neelu Berry for sending this letter on behalf of all of Julian’s friends and supporters and the millions he sought to protect.

As we struggle to make sense of :Julian-anthony: Fernandes’ sudden and untimely passing in as yet unknown circumstances, it’s important to let everyone know that Julian was engaged in lifesaving work as a mortgage fraud whistleblower and advocate for humanity, working as a Federal Postal Judge under the Universal Postal Union, helping people address the venality of banks running centuries-long fraud to wrest money from the indigent. Targeted for special attention from the UK police and banks, harassed, physically injured in his home, he did not back down, saying “If I do not stand up for us who the hell will?”

Julian was on Newsbreak/Ramola D Reports in late January 2020, discussing his work:

Julian speaks to a bank official about bank fraud and shutting down mortgage payments and holding officials accountable:

More news will be posted as it is sent in, and further coverage of Julian’s vital work will resume shortly. Service details were posted on Facebook by a friend. Anyone with further information is requested to send email to ramolad@everydayconcerned.net, thanks.

3/17/2020: Anthony Badaloo, whose discussions of fraudulent court enforcement of foreclosures and evictions were aired on Newsbreak 58 and Newsbreak 59 and reported here reports that Julian had been recently assaulted by a fake bailiff and spoke to him, in a conversation which reveals that the entire bailiff and court order industry built on fraud has been put on notice and is aware they are in the wrong:

“He was recently assaulted by an illegal bailiff, who saw one of my videos about his company, Andrew Wilson + Co. He (Julian) stated the following:-

For the mind: The no name palatrva part 10..

“So the fraudulent MCOL claim wound up with A. Wilson [high court enforcement] and their local man. M Dunn.
To my great-joy, M Dunn had watched the Anthony Badaloo A. Wilson vid recently posted and concurred there is a serious issue within the industry and many agents are aware they could be in serious trouble.
I spent an hr talking with him as he was keen to know more and keep his job, I offered him a job with me [lol] enforcing commercial liens.
M Dunn is very aware “Carnt pay we will take it away” are in deep shit along with most in the industry.
I offered him to opportunity to cease and desist forthwith or alternatively continue and I would summons him to Court on the grounds of fraud.
M Dunn stood down and encouraged me to summons the directors of A. Wilson.

Turns out he knew nothing of the notice sent to A. Wilson and concedes the company owes £10k for ea. of his visits, I should bill them.
Big thank you to Anthony Badaloo thanks dude, i will be posting the N208 claim later today. This will be fun. 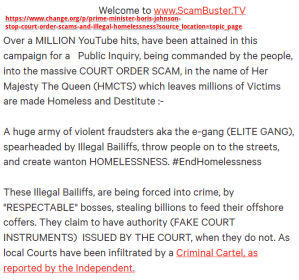 Many thanks to Anthony Badaloo for this additional information, which comes from the Campaign Against Court Order Scams, via the petition www.ScamBuster.TV: Please read, sign, share this petition, which is relevant to all in the UK, currently inching towards the 5,000 supporters milestone.

3/18/2020: Neelu Berry has posted more information on Facebook, questioning the circulating rumor of alcohol being behind Julian’s purported sudden collapse and death, with a video recording Julian’s sworn affidavit on 27 January, 2020: 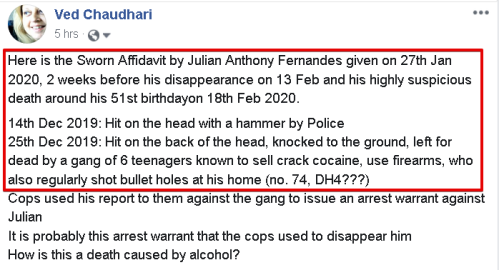 HM Coroner’s office in Durham responded to my query for the death certificate and more information as well as request for an inquest with information that an investigation into Julian’s death was ongoing:

“His death is subject to an ongoing investigation by the Coroner, no Death Certificate is available as the death has not been formally registered. The Coroner will decide on whether an inquest is required once the investigation has progressed to a stage when a decision on this can be made.”

14th Dec 2019: Hit on the head with a hammer by Police
25th Dec 2019: Hit on the back of the head, knocked to the ground, left for dead with broken ribs, by a gang of 6 teenagers known to Police to sell crack cocaine, use firearms, who also regularly shot bullet holes at Julians’ home (no. 74, DH4 6AS)
Cops used his report to them against the gang to issue an arrest warrant against Julian
It is probably this arrest warrant that the cops used to disappear him
How is this a death caused by alcohol?

well look in my arrogance and I am quite arrogant sometimes, I knew they were going to come out after me again so in December

take this as my sworn oath and statement

on December 25th I ran out of fags I left my home I walked up the road past my little shop, went to the snicket then I went to the Jet garage. I am putting it all on record. I spent 11 quid on Amber Leaf, rolling tobacco. I bought a bottle of vodka I think it was £7.29

I walked back down the hill and I sat on stones and I was looking at the kids, who I knew they were watching me, and they knew I was watching them. I had a choice. I could go the long way round, or I could go through the station? straight and clear? and see what happens. I thought why shouldn’t I? So I went straight down? Station? From behind I was whacked on the back of the head absolute dead end kicked out of me honestly. I am still in quite a lot of pain now, I went round I don’t know how long for, I don’t know how long I was out, from what I can remember there were 4, 5, 6 kids, we know who he is we know the kids we know the Gang. I got myself back home I literally crawled back home, it was literally quite painful but I crawled back home

how old were the boys, would you say?
16, 15, 14…Honeypot lane, cuma family, I’m not giving any more, that’s enough for now
so then you’ve reported this to the police?
Of course I have
And they’re saying what? that they don’t know who they are
just the Police don’t care oh no
I know PC Cramer, who has now issued a warrant for my arrest
what as part of your complaint against these boys? as they do
I’m the apparently the antagonist, I caused the problem in the first place

I have written once more to HM Coroner’s office requesting an update on their initially-referenced “ongoing investigation.”

Neelu Berry has raised the possibility in a Facebook post that perhaps a death did not occur, and that Julian has “gone missing” with a VIP intervention: https://www.durham.gov.uk/media/26839/Privacy-notice-Vulnerability-Intervention-Pathway-Service/pdf/PrivacyNotice-VulnerabilityInterventionPathwayService-January2018.pdf