Citizens Against Harmful Technologies Reports Extremely Abusive WBAN use on TIs by Surveillance State: Covert DOD/DOJ Program of Torture & Control, Headed for All, Related to Internet of Things

Brilliant and essential article and flyers from Skizit at Citizens Against Harmful Technologies on the Wireless Body Area Network (WBAN) system of implants operable by cell phones being touted as the future of health care, which those unlawfully targeted and subjected to Surveillance Abuse and Torture are reporting–an American and global program of New World Dysorder slow kill, genocide, and extermination run by trafficking thousands of people who are first put “under surveillance” into military and Intelligence and Criminal Justice neuro/bio-experimentation programs which employ No Limits in their barbaric assault on human bodies and human brains.

While WBANs are being presented as beneficial, they offer up a vision of Electronic Slavery and remote torture, which is exactly what “Targeted Individuals,” now privy to insider knowledge of the mechanisms of NWO dystopia, are reporting.

Many thanks to Skizit for this invaluable research and reportage.

Note to all readers: Covert technological systems of control are being developed, beta-tested, and rolled out on all; the time is now to learn, spread the word, understand the situation,  rescue current victims to prevent future victims, take just and peaceful action to stop the carnage. The road to perdition for all humanity is paved with the death and destruction of targets, and the silence of those who choose to by-stand while their sister and brother humans are being exterminated. Pick a side: your conscience or your compliance.

The new medical healthcare is called a Wireless Body Area Network (“WBAN”), a system of multiple implantable electronic sensors which relay the electronic signals of the body, including brainwaves, to remote computers.[1]Everything living emits frequencies.[2] The WBAN is a twoway radio system which can send radio frequencies to an implant system to ask it (called a “query”) to send back the recorded biological activity it is monitoring.[3]Implants can transmit continuously or “wake up” when queried. This system uses cell phones,[4] towers, drones, planes, satellites and transmitters embedded in the environment (buildings, vehicles and furniture).[5] This allows a person’s electrical signals from their brain and body[6] to be sent to a remote computer which can interpret what a person is thinking, seeing, hearing and feeling, and can monitor the functions of their heart, lungs, liver, kidneys and other organs and chemistry.[7] The human brain and body have been hacked! The two-way system can also send frequencies to (1) stimulate nerves, muscles and body organs to cause pain, vibrate, heat up or die and (2) perform torture as if a person was being suffocated, choked, cramped, burned and electronically raped or (3) cause heart attacks and strokes. It can be used for health monitoring[8] or depending on intentions of the user – torture and death. 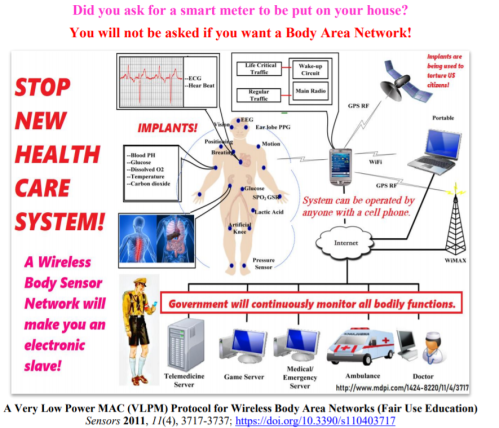 How is the system operated?  The 2G/3G/4G cellphone network can monitor one person at a time, but 5G will monitor 1,000 people at a time.[9] 5G will operate this system of implants in the ubiquitous Internet of Things (“IoT”).[10]People will be just “Things” in the IoT. Persons now being called Targeted Individuals are already implanted with the WBAN and are being tortured and killed. It is being used to “punish” people. Instead of being used as a medical tool for helping the aged and sick, the WBAN is being used to track, torture, burn, vibrate and destroy innocent citizens. Their bodies are literally being disassembled with microwaves. Victims are being controlled with multiple facets of this technology.[11]

Targeted Individuals.  Radios in the brain are being used to talk to people so only they can hear the voices (“V2K”). [12]  Stalkers who follow the Targeted Individual operate the implants to cause pain. Most stalkers belong to Infragard (stalkers working for businesses) or Volunteer Organizations, and coordinate attacks through the local first responders. Emotions including moods, thoughts and dreams can be artificially induced. Sensors can relay whether you are using the bathroom or having sex. Implants can cause uncontrollable elimination. Implants can perform electronic rape, or unwanted sexual stimulation. Neurostimulators can cause pain all day long. Thoughts can be put in your mind. One person’s brain frequencies can be analyzed, interpreted and sent to someone else’s brain to create unwanted experiences and dreams. One person’s implants can communicate with another person’s implants. Thoughts can be controlled on a continual basis.  Whole communities can be controlled with frequencies.[13]

Who is Operating This? Many agencies are involved. The Department of Justice is at the top and uses the FusionCenters to coordinate an offensive assault on targeted citizens.[14] US Special Operations Command has a program called “Continuous Clandestine Tagging, Tracking and Locating” (“CTTL”).[15] They are using new technologies to silently enter the homes of people while they are asleep or to put people to sleep with frequencies. The number of implants is endless.  The implantation and injections continue from time to time to terrorize the victim. Perpetrators do this silently and unseen. This is what is so alarming.  The whole human race could be under this electronic surveillance and control before they know it. The medical community is in full cooperation and are injecting victims when they get blood tests or other medical procedures just like Nazi collaborators did. What kind of people would do this? People who would do anything for money.

We need your help.  We need the voice of those who have a voice in this world. TI’s have no voice. TI’s are deliberately infected using entomological warfare (insects, worms and spiders) and authorities say they have “delusional parasitosis.”[16] TI’s report the surveillance and harassment and authorities say they have “delusional persecutory complex.”[17] TI’s report being tortured and suffering from microwave radiation, and authorities say they are “delusional and mentally ill”. Emergency Hospitalization for Evaluation[18] acts are being misused in every state to illegally arrest, drug and implant people who are not mentally ill. Then they use the same “mentally ill” for human experimentation, using laws enacted specifically for this purpose declaring this legal.[19]  Important:  The system of denial is integral to the system of oppression. It is a pre-planned negative response to the victim’s cry for help, recognition and treatment.  Their pleas for help are denied. They are helpless to protect themselves against an enemy they cannot identify. It is an unfair war with the whole nation against one individual. The nation has every offensive weapon invented and the individual does not have this technology.

The War on Terror is a war on the populations of the earth – terrorizing actors, school teachers, artists, writers, scientists, attorneys, natural healers, athletes  – anyone selected for elimination, including innocent people sleeping in their beds, who are being burned alive with laser attacks in the California fires.[20]Their deaths are made to look like they resulted from other things. Some are being forced to commit suicide.[21] Some are being hung in their closets.[22]Some are being radiated to death with directed energy weapons.[23] Please go to CitizensAHT.org to learn more and donate to this cause in any way you can.[24] Thank you.

4. Change.Org Petition to the President of the United States – Stop Electronic Harassment and Gangstalking: CHANGE.ORG-STOP_ELECTRONIC_HARASSMENT_AND_GANGSTALKING

6. Straussian Philosophy of the Post 9-11 Politics by Jan Allen: Who is Leo Strauss-2nd Edition

Posted in Activism, America, Waking Up