UPDATE, 4:30 pm (EST): Problem fixed. Thanks to great instruction from @AmreMuse on Twitter; removed the hyphens at front and end of comment and strikethrough vanished! End of drama! Merci beaucoup, Amre!

Earlier today: (Youtube Censors My Note to the TI Community)

Posting the comment I am unable to post currently on Youtube, which has appeared twice there with a strikethrough. While I try to figure out what that means on Youtube and who may be doing it, I did confirm that the strikethrough is also visible in Brussels, via confirmation with Melanie.  This is also a notice and request to Youtube to remove the strikethrough over my comment. I claim my God-given, natural-born, and Constitutionally-protected Right to Free Speech in making this comment and this matter known to the whole wide world, and Youtube has no business striking-through my comment–while leaving a whole bunch of hostile comments below mine clear.

This is the note/comment to the TI community members leaving comments beneath the video I posted last night addressing Katherine Horton’s Defamation Campaign against us: 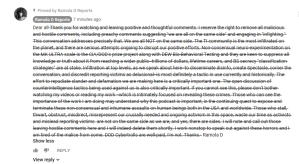 “Dear all–Thank you for watching and leaving positive and thoughtful comments. I reserve the right to remove all malicious and hostile comments, including preachy comments suggesting “we are all on the same side” and engaging in “infighting.” This conversation addresses precisely that. We are all NOT on the same side. The TI community is the most infiltrated on the planet, and there are serious attempts ongoing to disrupt our positive efforts.

Non-consensual neuro-experimentation on the MK ULTRA scale is the CIA/DOD’s prize project along with DEW Bio-Behavioral Testing and they are keen to suppress all knowledge or truth about it from reaching a wider public–trillions of dollars, lifetime careers, and BS secrecy “classification strategies” are at stake. Infiltration at top levels, as we speak about here–to disseminate disinfo, create Spectacle, corner the conversation, and discredit reporting victims as delusional–is most definitely a tactic in use currently and historically.

If you cannot see this, please don’t bother watching my videos or reading my work –which is intimately focused on revealing these crimes. Those who can see the importance of the work I am doing may understand why this podcast is important, in the continuing quest to expose and terminate these non-consensual and inhumane assaults on human beings both in the USA and worldwide.

Those who stall, thwart, obstruct, misdirect, misrepresent our crucially needed and ongoing activism in this space, waste our time as activists and mislead reporting victims are not on the same side as we are, and yes, there are sides. I will note and call out those leaving hostile comments here and I will indeed delete them shortly. I work nonstop to speak out against these horrors and I am tired of the malice from some. DOD Cybertrolls are well-paid, I’m not. Thanks.– Ramola D”

This is the video beneath which this comment was made:

This is the Description I have posted beneath the video:

Melanie and I have a no-holds-barred, gloves-off candid conversation about Katherine Horton’s ridiculous and unseemly defamation campaign against both of us and against CIA Whistleblower Barbara Hartwell and journalist Thomas McFarlan, which seems to have peaked in her latest rant video, which is here: https://youtu.be/BJO-f6zemv4. Melanie reads from carefully prepared notes to respond to Katherine’s endless slander directed against her which makes all sorts of grandiose and false allegations about her misuse of funds among other things, and remarks on Katherine’s unavoidable culpability in the loss of her child to the Belgian Juvenile Court system, while I address Katherine’s slander directed against me in her libelous Bloodlust page on her website as well as in her latest rant video, and also address Katherine’s misleading and inaccurate affidavit that she wrote for Frederic Laroche in his recent court hearing on Nov 29, 2018, which contradicts Frederic’s own reports in his own documents and as accurately recorded in my statement for him—a document of special interest to me since I have also written a statement for Frederic, on his request, at a time when he was given to understand by Katherine that she would not be writing a new statement for him. (A subject I will address fully separately.)

Melanie advises that no victim trust Katherine Horton for their court cases, and I do the same, with the added remark of my substantiated opinion that she is a double agent operating as a saboteur in the midst of genuine victims of the Intel, Military, and fusion centers. I am working on two articles to further address aspects of counterintelligence sabotage and infiltration as related to Katherine’s activities against me and against others and will publish them shortly on my website, everydayconcerned.net.