Frederic Laroche, the systems engineer and human rights activist whose recent court hearing rife with irregularities was covered here earlier, reports that the Grenoble judge who refused to hear in court the account of what transpired at the May 2, 2017 Incident characterized wrongfully and deceptively by the Grenoble Prosecutor Jean-Yves Coquillat as an “accident”–although it was essentially a bizarre incident initiated by the woman Ms. Stephanie Joseph who suddenly jumped on top of his car and later sued him for damages–has issued her written judgment in this tragic case of what most certainly appears to be a case of outright criminal entrapment and extortion. The kangaroo-court hearings on November 29 depicting refusal to examine the incident justly or reasonably and exposing an apparent underlying judicial allegiance with Voiron police, the Grenoble prosecutor, and Voiron Hospital and Alpes Isere St. Egreves Hospital psychiatrists—all of whom, it seems clear to this reporter, engaged in wrongful arrest, prosecution, misdiagnosis and force-medication of an innocent and non-violent man—seem to point to an entrenched network of corruption and abuse of power in Grenoble. 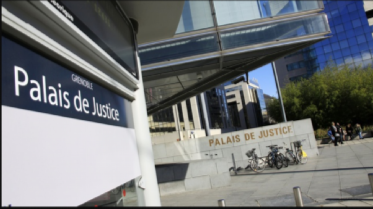 The conviction, inflated and extreme, includes one year of incarceration in jail and three years of judicial control with mandatory reporting on a regular basis to a jail center in Grenoble to ensure psychiatric follow-up and psychiatric medication.

Social workers to take control of his bank account and restrict use of his own finances are included in this draconian judgment with intent to curtail all expenditure of whatever is deemed trivial pleasure, while Mr. Laroche is expected to save all his funds for the paying out of a large amount to the alleged victim, the precise size of which is to be decided at a future date, the 2nd of December, 2019.

In addition, Mr. Laroche is sentenced to definitive confiscation of his car and cancellation of his driving license with the added interdicton of license-renewal privileges to be withheld for two years.

The most egregious portion of this judgment favoring the initiators of this “accident” and entrenching the unsupported diagnosis handed out by Voiron Hospital psychiatrists Drs. Sarrazin and Girard wherein Mr. Laroche was wrongfully characterized as a violent and dangerous man, despite all evidence to the contrary, and dosed with excessive and dangerous amounts of the controversial drug Risperidone to the point of toxic poisoning and near-paralysis, demands that Mr. Laroche regularly see a psychiatrist and imbibe neurotoxic medication continuously, so as to render him placid and docile at all times.

Failure to be present at any appointment with social workers, jail, police, psychiatrists is to prompt re-incarceration or psych-commitment at the psychiatric hospital.

In administering this extraordinary and completely unjustified judgment the judge stated that Mr. Laroche fully warranted this judgement being severely delusional therefore dangerous and in danger of committing a similar crime at any time. (The implication being that Mr. Laroche had engaged in a hit-and-run after the woman jumped on his car and slid off, when he had not stopped but continued driving onward. No doubt the implication also being that the non-consensual neuro-experimentation Mr. Laroche raises public awareness about cannot be considered to exist, as per the ignorant and uninformed conclusions of the court-recognized psychiatrist, Dr. Joelle Ribot, and the inability of the judge to read and comprehend the Investigative Reporter Statement provided to the court by this reporter, providing clear evidence from neuroscientists and military and Intelligence whistleblowers alike of the existence of such research.) 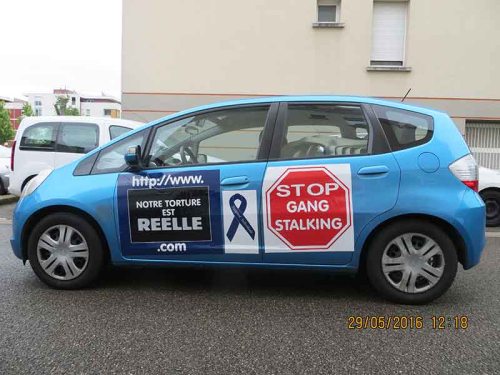 By handing out this lopsided conviction which ignores the facts of the case and ignores all supporting evidence establishing the reality of Mr. Laroche’s witness, particularly to being a victim of long-standing neuro-experimentation on which subject he has conducted much successful raising of public awareness, particularly with his car, this judge has apparently sought to establish there is no place for justice in the Grenoble Criminal Court, let alone reason and intellectual analysis.

The date on which Mr. Laroche is required to present himself at the jail is January 24 at 9:30 am, which he says in itself presents a challenge with no car, and no early buses from his remote village near Voiron where he lives.

The fact that a judge can engage in such farcical court procedures as reported previously and by Mr. Laroche in live-streamed conversations Part I and Part II with this reporter and condemn a man damaged by psychiatric medication to further assault with psychiatric medication on the basis of a wrong diagnosis by ill-informed and over-reaching psychiatrists in itself points to the horrific state of affairs in “polite society” today where medical professionals do not provide health-care but health-destruction and judges protect ill-acting public prosecutors and police instead of meting out true justice.

The upshot, that Authoritarian Psychiatry rules, must not be ignored in this analysis of the failure of justice at Grenoble. Courts are too easily relying today on the facile medical tyranny proffered by Authoritarian Psychiatry—an extremely dangerous trend for all humanity—and the people of France, Europe, and the world need to collectively wake up and address this calumny before Fascism in the Form of Force-Medicators completely takes over our world.

Mr. Laroche intends to appeal this egregious judgment and is working with legal counsel to do so.