Janet Phelan to President Trump: “At This Juncture, America is No Longer Free”

Janet Phelan, investigative and human rights journalist, poet, author of the memoir Exile, whose recent appeal to the Inter American Commission on Human Rights seeking protection as an American journalist from retaliatory harassment and death threats was covered here earlier, responded this week to an email solicitation from Team Trump asking Americans to sign the “Official Stand for the National Anthem petition NOW” with a powerful reminder to the President about the dismal state of affairs in the USA today—and the complete loss of freedom and lack of justice evident currently in America.

Team Trump from DonaldJTrump.com’s letter offered the usual verbiage appealing to patriotism and calling up veterans and sacrifice and freedom:

“The President has asked for a list of everyone who supports STANDING FOR THE NATIONAL ANTHEM, our country, and our great veterans who have made the ultimate sacrifice defending our freedom.” 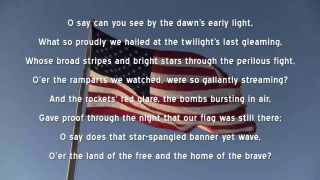 Pointing to the rampant corruption and abuse in today’s fallen US court system where judges take bribes, police kill citizens, minor drug-offenders are excessively penalized, and children are wrested from families and handed over to “sexual predator(s) and known abuser(s),” Ms. Phelan called attention also to intensive whistleblower retaliation, the current use of “unconventional weapons” on NSA whistleblower Karen Melton-Stewart and the silencing of dissent, saying she was not going for stand for the national anthem but weep for it instead.

“At one time, America was the leader of the free world. At this juncture, America is no longer free.”

I am not going to stand for the National Anthem. I am going to weep for it.

In language and admonition that surely resonates across the length and breadth of America today, Janet Phelan wrote:

I have made my decision. I am not going to stand for the national anthem.

I am going to weep for it.

At one time, America was the leader of the free world. At this juncture, America is no longer free.

Police kill citizens with impunity. The courts are dead set on extracting as much money as possible from litigants, while dispensing abuse, rather than justice. This is best seen in probate courts, where judges regularly appoint guardians-for-profit who then rape the hard earned savings of their wards and then deny them appropriate medical care, sending them off to early graves. Equally problematic are family courts, where children are regularly sent to live with a sexual predator or known abuser while the judges demonize a loving parent.

The plight of those in the criminal justice system is equally severe. For years, concerns have been voiced about the incarceration of those who commit victimless crimes, such as minor drug offenses.  We are now seeing criminal sentences being levied for what are non-crimes: lengthy incarcerations for violating unconstitutional and first amendment violating- gag orders, lengthy incarcerations for contempt of court for violating unconstitutional court orders, and even incarcerations for failure to pay court costs, which were already deemed to be non-jailable and redolent of “debtors prisons.” Judges’ orders—even when legally unsupportable and clearly unconstitutional–have the effect of law and are being used as  political tools to shut down whistleblowers and dissidents and to fill private prisons and psychiatric hospitals.

Foundationally, America is a system of laws. This has been corrupted beyond recognition and we now have judges taking bribes under the table through “loans” they do not pay back or through other mechanisms, such as laundering payoffs through casinos. We have dedicated whistleblowers, such as former NSA analyst Karen Melton Stewart, who are under mortal attack by unconventional weapons and we have an increasing number of Americans fleeing the country for their safety.

I am still waiting for you to “drain the swamp,” Mr. President. I am waiting for freewheeling judges who legislate from the bench to be led off in handcuffs. I am waiting for the police officers who attacked me, including Loren Dawson, to face a jury and culpability. I am waiting for the district attorney who tried to jail me for reporting a death threat to join Officer Dawson. Until then, there is nothing very much to stand up about.

I stand for freedom and justice, not for tyranny and lies. When America has returned to her principles, I will then join you in standing for the national anthem. Until then, I will only weep.

Source: Janet Phelan, email. Posted with thanks, by permission of the author.

3 responses to “Janet Phelan to President Trump: “At This Juncture, America is No Longer Free””