Ralph Nader: Open Letter to Chairwoman Janet Yellen from the Savers of America

Re-posted from The Nader Page, with thanks. Ralph Nader, “full-time citizen,” in his own words, consumer advocate, government critic, analyst, activist, calls out the Federal Reserve.

We are a group of humble savers in traditional bank savings and money market accounts who are frustrated because, like millions of other Americans over the past six years, we are getting near zero interest . We want to know why the Federal Reserve, funded and heavily run by the banks, is keeping interest rates so low that we receive virtually no income for our hard-earned savings while the Fed lets the big banks borrow money for virtually no interest. It doesn’t seem fair to put the burden of your Federal Reserve’s monetary policies on the backs of those Americans who are the least positioned to demand fair play.

We follow the reporting on your tediously over-dramatic indecision as to when interest rates will be raised – and no one thinks that when you do, it will be any more than one quarter of one percent. We hear the Federal Reserve’s Board of Governors and the various regional board presidents regularly present their views of the proper inflation and unemployment rate, and on stock market expectations that influence their calculations for keeping interest rates near-zero. But we never hear any mention of us – the savers of trillions of dollars who have been forced to make do with having the banks and mutual funds essentially provide a lock-box for our money while they use it to make a profit for their firms and, in the case of the giant banks and large mutual funds, pay their executives exorbitant salaries..

We are tired of this melodrama that exploits so many people who used to rely on interest income to pay some of their essential bills. Think about the elderly among us who need to supplement their social security checks every month.

On October 27, the Wall Street Journal headlined the latest rumors of twists and turns inside the secretive Federal Reserve: “Fed Strives For Clear Signal on Rate Move: As 2016 approaches, the central bank hopes to better manage market expectations.”

What about the expectations of millions of American savers? It is unfortunately true that we are not organized; if we were, we would give you and the Congress the proper signals!

Please, don’t lecture us about the Fed not being “political.” When you are the captives of the financial industry, led by the too-big-to-fail banks, you are generically “political.” So political in fact that you have brazenly interpreted your legal authority as to become the de facto regulator of our economy, the de facto printer of money on a huge scale (“quantitative easing” is the euphemism for artificially boosting the stock market) and the leader of the Washington bailout machine crony capitalism when big business, especially a shaky Wall Street firm, indulges in manipulative, avaricious, speculative binges with our money.

When it comes to the Fed, Congress is mired in hypocrisy. The anti-regulation, de-regulation crowd on Capitol Hill shuts its mouth when it comes to the most powerful regulators of all – you and the Federal Reserve. Meanwhile, Congress goes along with the out-of-control, private government of the Fed—unaccountable to the national legislature. Moreover, your massive monetary injections scarcely led to any jobs on the ground, other than stock and bond processors.

So what do you advise us to do? Shop around? Forget it. The difference between banks, credit unions and mutual funds may be one-twentieth or one-tenth of one percent! That is, unless you want to tie up money, that you need regularly, in a longer term CD or Treasury. Even then interest rates are far less than they were ten years ago.

Maybe you’re saying that we should try the stock market to get higher returns. Some of us have been impelled to do that, but too many have lost their peace of mind and much money in the market.

Chairwoman Yellen, I think you should sit down with your Nobel Prize winning husband, economist George Akerlof, who is known to be consumer-sensitive. Together, figure out what to do for tens of millions of Americans who, with more interest income, could stimulate the economy by spending toward the necessities of life.

For heaven’s sake, you’re a “liberal” from Berkeley! That is supposed to mean something other than to be indentured by the culture and jargon of the Federal Reserve. If you need further nudging on monetary and regulatory policies of the Fed, other than interest rate decisions, why not invite Berkeley Professor Robert Reich, one of your long-time friends and admirers, to lunch on your next trip home?

Start imagining what we, the savers, have to endure because of plutocratic, crony capitalism for which the Federal Reserve has long been a leading Tribune.

Can we expect your response?

James Corbett: “The Banksters Did It”: The Central Banks Have Engineered This Financial Collapse

Re-posted article by James Corbett from The Global Elite, Aug 26, 2015:

Excerpt: “But there is already one vitally important take away from these events that the independent media must articulate now, before it’s too late. Namely: This crisis was engineered by the central banks. It is their fault.

Let me repeat that again in case you missed it: This crisis was engineered by the central banks. 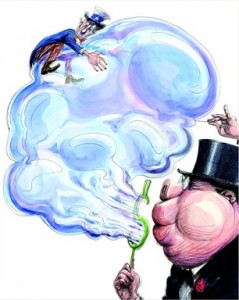 This point is not even controversial. It has been the universal consensus of institutions ranging from the Bank for International Settlements to the Official Monetary and Financial Institutions Forum, and from OECD officials to former Fed Governors and even Alan “Bubbles” Greenspan himself.

In fact, analyst after analyst and pundit after pundit–including the most mainstream of mainstream publications–have been sounding the alarm on the stock market bubble for much of the past year.

This tells us two things: the current market mayhem was perfectly predictable (and predicted), and the central banks not only stayed the course but actually doubled down with more and more QE injections.

It is the central banks that have created this mess, and what’s more they have created this mess in the full knowledge that their actions would lead to disaster. And now, one can be sure, the same central bankers and their political puppet mouthpieces will use this crisis to continue the construction of the “New World Order” that they called for in the wake of the 2008 collapse.

Anyone who can’t see the endgame now–global government by the bankers, of the bankers and for the bankers–is either blind or wilfully ignorant.

It is especially important to state these obvious truths now, because we can already see a false narrative underway. This narrative has two main thrusts: one is to paint China as the culprit for the global downturn and the other is to assume that only central banks can save the day (with even greater liquidity injections and even deeper rate cuts).”