In a rather brief and opaque statement on June 28, 2019 titled an “Order” Judge Michael McShane of the US District Court of Oregon, demonstrating that Justice is quite visibly dead in Oregon upheld Judge Mustafa Kasubhai’s inexplicable and baseless decision finding Todd Giffen mentally incompetent, and ordered he be “restored to competency.”

Liberty weeps as we know, and Justice too

Stating he found no error, and the Review and Recommendation by Judge Kasubhai is correct, flying therefore in the face of all evidence to the contrary presented by Todd Giffen and his psychologist of many years, Dr. Seth Farber, as presented in Dr. Farber’s recent letter to Judge McShane, as well as investigative reports and declarations by this science-and-technology reporter on the reality of the military neurotechnologies Todd has reported being used on him non-consensually (and thereby establishing, for all educated Americans, including judges and lawyers who are not immune from literacy that mention of such neurotechnology does not constitute mental illness); and, additionally, several Declarations by supporters pointing out Todd is highly versed in legal matters and scarcely schizophrenic as Dr. Cynthia Low the court-appointed psychologist glibly stated after 2 hours with Todd and no evidence, Judge McShane essentially added to the blanket railroading of Todd Giffen’s case by several parties here and established that he too is a compromised judge unable to make an independent review of the actual facts.

In doing so he has also upheld the deliberate, planned Obstruction-of-Justice moves by US Attorneys Billy Williams and Joseph Huynh to persuade Judge Kasubhai to find Todd incompetent despite his being acknowledgedly articulate in court, noted by Todd and reported here earlier:

Despite lengthy objections to Judge Kasubhai’s ruling carefully detailed by Todd Giffen and sent in to Judge McShane, Todd notes that this brief order suggests he has “refused to look at any case laws or material or even ask that any witnesses be called to testify.” 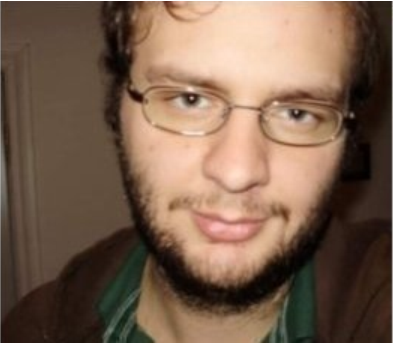 Primary among his objections was the fact that he was not permitted to call psychiatrists and psychologists of his own choosing for the previous hearing, thanks to negligence and stalling by his court-appointed attorney Lisa Ludwig: “Under 18 USC 3006A I was reading the case laws, it states ‘defendant has an absolute right to examination by independent psychiatric experts of his own choosing separate from the courts appointment of any experts..’ Yet no motions were filed on my behalf, nor anyone hired.”

At that May 23 hearing with Judge Kasubhai, the speculation that Lisa Ludwig was in fact working with the judge and US attorneys against Todd Giffen as a “double agent,” does not appear to analysts of this case as an idle one.

“Only one witness was present; the government’s own, this was done to knock out from the record all my witnesses and doctors.

My attorney refused to hire any doctors or my private investigator solely to help the US attorney and judge create the record which would have no details about my abuse in custody, so I could be committed and the judge would not look like he was making any mistakes.

This was all rigged, and a set-up as Seth Farber and all my witnesses wrote letters supporting me. Lisa Ludwig was available in April and May to work on my case, but pretended she had no time.

The reality is she denied me a service on purpose, which is why no private doctors or experts were hired, and at the last minute, she moved to block having to subpoena anyone to make sure nothing contradicting Cynthia Low would be present.”

Further, while the US attorneys submitted a Memo to the judge fixating on Dr. Cynthia Low’s faulty assessment of Todd and seeking to discredit Dr. Seth Farber (as reported earlier), sudden stating of need for a “forensic psychologist” in court and Lisa Ludwig’s failure to support Dr. Farber in court also sought to exclude Dr. Farber.

“My attorney had him present, but excluded his testimony entirely and refused to let him speak, so they could make it look like they allowed him to be called to talk – but in reality, they would not let him talk or have any witnesses there to back him up.”

Dr. Farber  also had pointed this out to Lisa Ludwig in his letter to her: 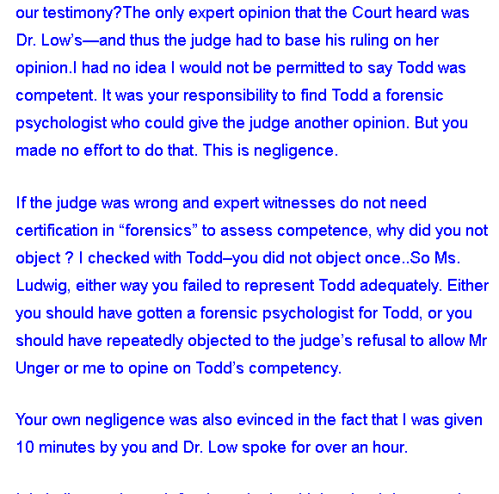 Most egregious about the current ruling by McShane is his blanket dropping of the case and refusal to hold a rehearing, despite grave violations of judicial process and defendant’s rights.

“…I looked up the case laws for 18 USC 3006 and I found out I have a right to hire my own independent psychiatrist regardless of what the court thinks.

Defendant with history of mental illness whose competency and sanity had already been evaluated by two court appointed psychiatrists, has right to hire his own psychiatrists of choosing under 18 USC 3006A.

District Court abused its discretion in declining to appoint neuropsychological expert to aid defense because (1) reasonably competent attorney would have found services of requested expert necessary to provide adequate representations; and (2) defendant was prejudiced by not having access to expert he requested because defendant requested expert services is furtherance of claim that would have, if meritorious, changed outcome of case.

So essentially McShane was required to heed my requests for additional doctor evaluations in my objections because defendant has an absolute right to be evaluated by his own chosen psychiatrist. The appeals court would deem my objections to the magistrate’s findings as making timely requests to be evaluated by my own doctor, because McShane had not yet adopted or made any decision about my competency yet, but I was allowed under 20 USC 646(b)(1) to submit new evidence and have a rehearing to do so.”

Notice must also be made of Judge Kasubhai’s lengthy and spurious narratives in his Review and Recommendations where he demanded Todd be seen as incompetent by his order and be “restored to competency” by the court’s willing henchmen aka psychiatrists, which Todd spent several pages refuting, and which this writer intends shortly to dissect and address in closer detail.

One aspect of this missive can be commented on here, the intention throughout to shore up this manufactured notion of “incompetency” by projecting Todd as a manic and uncontrollable person given to outbursts, imagining covert government assaults, and therefore clearly delusional and incompetent:

Todd’s own recounting of his calling out in court at that Dec 5 hearing when his then-court-appointed attorney was Todd Bofferding, was reported earlier:

By all counts, Todd Giffen has been the victim of intense discrimination in the Oregon District Courts, and appears to be being held unlawfully in prison (for nine months) by way of a collusive mechanism involving corrupt lawyers and judges, US attorneys and court-appointed psychologists all keen to protect non-consensual military and Intelligence neurotechnology experimentation being conducted unlawfully on hundreds of thousands if not millions of people inside USA and also abroad, worldwide—which this reporter once more reported to President Trump this Fourth of July week, as reports of horrific invasion of bodily and brain privacy, absolute torture, and grave human rights violations pour in from Americans all over the US and worldwide. (Please see the many video interviews with reporting survivors at Ramola D Reports on Youtube, and print interviews and articles at The Everyday Concerned Citizen for evidence of such reports, including highly significant interviews with NSA, CIA, and FBI whistleblowers on matters of Surveillance abuses and non-consensual Neurotech/DEW use on Americans.)

Basic investigative journalism establishes without a doubt that the kind of invasive brain assaults Todd Giffen reports are being reported also by thousands of others, testified to as ongoing by military/Intelligence whistleblowers including Dr. James Giordiano and Dr. Robert Duncan, and indicated as plausible by several declassified documents reporting the studied bio-effects of non-lethal weapons which include microwave technologies.

Anti-personnel neuro-surveillance technologies are being tested by the National Institute of Justice, as per a Memorandum of Understanding in 1994 between DOD and DOJ and their own annual reports; and psychotronic/neuroweapon use by local Law Enforcement is being contemplated openly by a police chief in California, who reports, as does Dr. Giordiano, that these matters are being studied academically by the Department of Justice.

Does the Department of Justice, the FBI, and the Attorney-General imagine their current secretive use of these neurotechnologies and anti-personnel “non-lethal-weapons” also putatively hidden in documents as enhanced surveillance, biometric surveillance, surveillance devices, electronic surveillance, crime prevention, and advanced technology on Americans, non-consensually and intrusively and inhumanely, is going to be kept hidden forever?

But perhaps the real truth here is that these agencies, as also the CIA, NSA, and Department of Defense know very well that what is being reported by Americans is true, and fear the avalanche of culpability and retribution headed their way once the extent of their criminality in wreaking absolute torture and bodily/brain invasion on their unconsenting and impotent victims is fully known to the American public, and prompts the full exposure and shut-down of all their Classified-to-Conceal-Crime “brain research” National-Security-lie programs–which appear to have transcended MK ULTRA in criminality currently, or at least, as much as has surfaced of those 1970s Church Committee findings on MK ULTRA.

Hence the shutting-down of any possibility for justice in the judicial system, and hence this absolute control of judges and attorneys, who are willing to sound delirious with stupidity in their pronouncements of orders which fly in the face of all reason, and unashamedly inflict further criminal violations of human rights and outright political persecution hand-in-hand with criminally unethical psychiatry in the attempt to “restore to competency” a quite mentally sound and competent reporter of their crimes.

Matters of collusion, conspiracy, and sabotage have been extensively detailed in this article which includes letters and complaints sent to Lisa Ludwig, Todd Giffen’s attorney and Judge McShane by Dr. Seth Farber and this reporter as well as Todd’s own analyses from his jail cell in Sheri­dan, Oregon:

Todd Giffen is currently researching options wherein he can appeal this second lax finding by Judge McShane, find a private attorney willing to take on his case, and is intending to sue Lisa Ludwig for essentially operating as a double agent on behalf of the US Government and helping to lose his defense by failure to provide assistance of counsel, interference with his “compulsory process clause rights,” “deliberate indifference/reckless indifference to Due Process,” refusing to call witnesses and private doctors he called for, while also failing to procure him basic medical care and protect him from harm in custody.

Unconventional Journalism in the Face of Unconventional Warfare: Is Fear of Deep State Crimes Surfacing Driving the Oregon Public Defender Sabotage of Todd Giffen’s Case? | May 23, 2019