Defense Contractor Lockheed Martin whose foray into multiple Government agencies was covered in a 2011 Guernica article featuring an op-ed by William D. Hartung, Is Lockheed Martin Shadowing You?: How a Giant Weapons Maker Became the New Big Brother, and whose participation in covert microwave weaponry assaults on the populace has been explored online from 2010 onwards by journalist Vic Livingston, is apparently not merely working on building vehicles to Mars or hypersonic fighter jets as their website suggests, but assisting fusion centers in surveillance and covert assault of specific individuals.

William D.Hartung, director of the Arms and Security Initiative at the New America Foundation and author of an extended study on the privatization of military and Intelligence functions, Prophets of War: Lockheed Martin and the Making of the Military-Industrial Complex has noted:

“True, Lockheed Martin doesn’t actually run the U.S. government, but sometimes it seems as if it might as well. After all, it received $36 billion in government contracts in 2008 alone, more than any company in history. It now does work for more than two dozen government agencies from the Department of Defense and the Department of Energy to the Department of Agriculture and the Environmental Protection Agency. It’s involved in surveillance and information processing for the CIA, the FBI, the Internal Revenue Service (IRS), the National Security Agency (NSA), the Pentagon, the Census Bureau, and the Postal Service.

Oh, and Lockheed Martin has even helped train those friendly Transportation Security Administration agents who pat you down at the airport.”

“Each day, a nationwide scalar electromagnetic radiation “multifunctional” radio frequency directed-energy weapon attack system employing phased array cell tower antenna transmitter/receivers and GPS satellites, under the administration of U.S. Cyber Command and military contractor Lockheed Martin, is used to silently and invisibly torture, impair, subjugate, and degrade the physical and neurological health of untold thousands of American citizens who have been extrajudicially “targeted” by a hate- and ideology-driven domestic “disposition matrix” as “dissidents” or “undesirables.”

A report provided anonymously to this writer spells out the extent to which Lockheed Martin is involved and is posted in full below. According to the investigation reported in this document, Lockheed Martin engages in cyberwarfare on behalf of several Military and Intelligence agencies, working round the clock to suppress and censor certain kinds of information on the Internet, and to conduct warrantless surveillance on all communications of targeted individuals, facts noted by Vic Livingston online in his article U.S. Cyber Command/Lockheed Martin Censorship Regime Tampers With Internet Content, Covers Up Celltower Electromagnetic Weapon Assaults On Citizens.

center which operates a US government radio and microwave frequency weapon system utilizing the country’s cell towers to launch covert microwave assaults on citizens and residents. Operational in 46 of the 50 states, Lockheed apparently runs a networked Stasi-like communications and training operation tentacled into every security and law enforcement organization in the state, down to state and local police and fusion centers, focused on secret policing, surveillance, and harassment of individuals.

The nexus of this operation appears to be a Mission and Combat Support Solutions center in Norristown, Montgomery County, PA employing several thousands of workers. 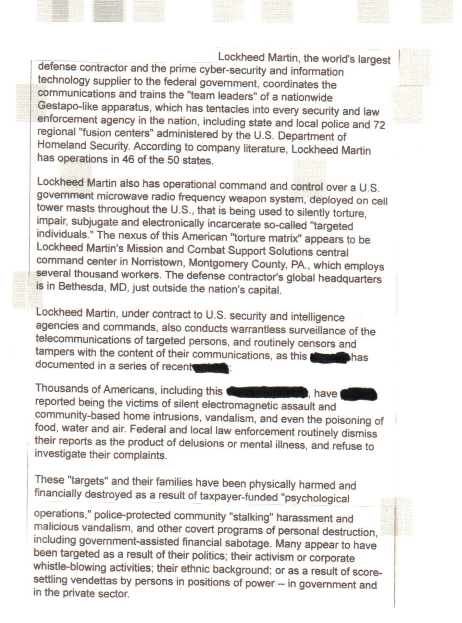 Among many other activities, domestic and foreign, of Lockheed Martin, in surveillance and targeting, William Hartung’s op-ed notes:

“(S)ince at least 2004, Lockheed Martin has been involved in the Pentagon’s Counterintelligence Field Activity (CIFA), which collected personal data on American citizens for storage in a database known as “Threat and Local Observation Notice” (and far more dramatically by the acronym TALON). While Congress shut down the domestic spying aspect of the program in 2007 (assuming, that is, that the Pentagon followed orders), CIFA itself continues to operate.” 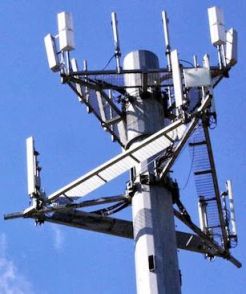 By this report and many others online, several thousand law-abiding, ethical, and community-minded Americans are targeted by these Government-contracted taxpayer-funded operations of police-protected community stalking and harassment, as well as incarceration and torture in “electronic concentration camps” facilitated by the use and specific, Gestapo-like operation of this deadly microwave weapons technology. The intention of these targeting and suppression operations has long been speculated to be based in undisclosed state censorship and control efforts; now this document confirms that malicious score-setting vendettas by people in power appear to rule the targeting of activists, whistleblowers, and ethnic minorities.

Those targeted in these ways are made the butt of community harassment through lies, slander, and defamation by the operators of these campaigns, in addition to being assaulted with microwave weaponry, also noted in this document.

As more and more information seeps out today regarding the unlawful targeting, surveillance, harassment and assault of upstanding community members in the wrongful name of national security, the question increasingly becomes: what are aware, educated Americans going to do about it?

Re-publishing of this article in whole or part, with attribution and linkback, is welcomed.

This entry was posted in America, neuroweaponry, Surveillance, Targeted Individuals, Waking Up and tagged Lockheed Martin, radio and microwave weapons. Bookmark the permalink.